Join one of Key West's most experienced and highly accredited fishing captains on a fishing trip that is truly unique. Flats fishing takes you to the shallow waters of the Key West back country to go after such prized catches as bonefish, tarpon, and permit. Flats fishing out of Key West Florida is much different than the more commonly seen Offshore fishing trips. These fishing trips take you right in the action and uses different fishing equipment such as light spin rods and fly rods, shimano, tibor and Abel reels, and fly tackle.

On board Bill Stockton's 16-foot Hewes Bayfisher Skiff, the Dream Sickle, you will ride out to the shallow waters of the Gulf of Mexico and what's called the Key West back country or the “bay side” of the island. The natural beauty around you will definitely be something you will appreciate on your trip. But it is the fishing that you are after and we are confident that Captain Bill Stockton will provide you with the most successful and memorable Key West flats fishing trip possible.

Captain Bill Stockton has been fishing the waters of Key West, the Florida Keys, and South Florida since he was eleven years old! When you get to spend a few hours with this captain, you will see why he is so highly respected and admired among fishing enthusiasts. The flats are his passion and catching tarpon, bonefish, and permit are his expertise. You will be sure to leave your Key West flats fishing charter with a sense of satisfaction and accomplishment.

Up to two guests can join Captain Stockton on a flats fishing trip. The species you go after depends on the time of the year, the conditions out on the flats, and your personal preference. Many people come down hoping to catch tarpon, and this is actually one of the easiest yet still extremely fun and exciting species to catch. The best time for tarpon fishing in Key West is April through July. On most days, tarpon fishing is done through the technique of sight fishing, where nothing is cast until the fish are spotted. Permit are exciting to go after because of their elusive nature, which has given them the nickname “phantom of the flats”. They are unquestionably one of the more difficult flats species to catch, but that only makes the hunt and the catch that much more exciting! There are several peak seasons for permit, including the breezier months of February and March, followed by a second peak around June through October after they return from spawning in the deeper coral reefs and wrecks.

Other flats species that Captain Stockton goes after includes the “grey ghost of the flats” the Bonefish, several smaller species of sharks such as black tip or nurse sharks, barracuda (also known as the “tiger of the flats”), spotted sea trout, lady fish, jack crevalle, and yellow jacks. Whatever species you want to go after, or whatever type of flats fishing adventure you have in mind, Captain Bill Stockton and his Dream Sickle will make your dreams a reality! There are not many flats fishing captains in Key West, so the Dream Sickle and other smaller boats like it are sold out months in advance, so make your reservation early!

What is the weather cancellation policy?
If the activity iscancelled due to bad weather, and you cannot reschedule, you will be issued a full refund.

Are food and beverages included?
No they are not, however you are more than welcome to bring your favorite foods and beverages and we will provide a cooler and ice to keep them fresh and cold for you.

Is bait provided?
Yes. Bait is provided on all of our fishing trips.

What is the customary gratuity?
If you enjoyed your trip and are satisfied with the service provided by our Captain and Crew, a tip of 15-20% of the total trip cost would be very much appreciated. 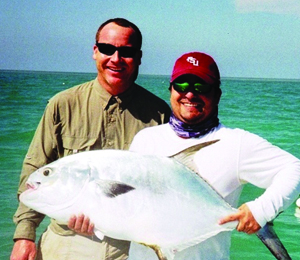 I have been to the Bahamas many times, but Dream Sickle is one of my favorite trips! It includes everything that everyone should do here. As a Bahamas veteran, I can say only the best about this experience!