Duval Street Is at the Heart of the Key West Experience

Duval Street Is at the Heart of the Key West Experience 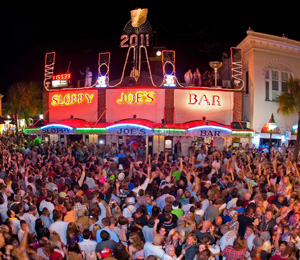 World-famous Duval Street runs from northwest to southeast in downtown Key West, from the Gulf of Mexico to the Atlantic Ocean. Just over a mile in length, Duval Street is truly the center of the city, offering much of what makes Key West, also known as the Conch Republic, the unique place that it is.

Within a block of Duval Street at the north end are several very interesting attractions, including the Shipwreck Museum, the Aquarium and the Museum of Art & History. The Conch Train tour, which leaves from the depot at the corner of Front and Duval Streets, is one of Key West’s most popular attractions, offering entertaining bits of history as it circles the island. Also near the north end is Mallory Square, a large plaza that is the site of a Sunset Celebration every evening beginning two hours before sunset. The festivities include street performers, arts and craft booths and food vendors, and the entire crowd applauds the spectacular tropical sunsets.

A block from Duval Street nearer to the southern end is another of the island’s most popular attractions. The Ernest Hemingway House, where the author lived during the 1930s and 1940s, is furnished with his belongings, and is home to many cats that are supposedly descended from his own. Also near the southern end of Duval Street are the Lighthouse Museum, where visitors can climb to the top of the light, and the Butterfly Conservatory which houses more than 50 species of butterflies.

The southern end of the street on the Atlantic side is more residential, and features beautiful Victorian mansions interspersed with more modest bungalows. The most iconic landmark in this area is the large concrete replica buoy a block from Duval at the corner of South Street and Whitehead Street which declares this to be the southernmost point in the continental U.S. Capitalizing on this are establishments such as the Southernmost Beach Café and the Southernmost Hotel, both on Duval Street.

From the Westin Harbor complex at the north end of the street where the cruise ships dock, to the lovely Victorian Southernmost House at the opposite end, there are hotels on Duval Street to suit any taste. The larger hotel resorts are near the northern end of Duval Street and include the Ocean Key Resort on the harbor next to Mallory Square, and the Pier House, a traditional island resort boasting a private beach. Smaller hotels and inns include the Speakeasy Inn, Orchid Key Inn, Wicker Guesthouse and the Duval House.

Key West has long been an established artists’ community. John James Audubon and Winslow Homer are among the famous artists who spent time here, and the island has continued to attract talented artists through to the present day. Some of their work can be seen at galleries on and near Duval Street, including the Gingerbread Square Gallery, Harrison Gallery, Joy Gallery, the Gallery on Greene and the Key West Art Center.

Along with the typical souvenir and T-shirt shops, a number of interesting specialty and craft shops such as Glass Reunions, Island Artists Co-op, Wild Side Gallery, and the Island Style Gallery can be found on Duval Street, and offer unexpected and unusual gifts, jewelry, furnishings, accessories and décor.

Sometimes called the Bourbon Street of Key West, Duval Street is home to many of the most famous bars and watering holes in town, and the popular Duval Pub Crawl includes stops at many of them. Sloppy Joe’s, at its current location since 1937, was patronized by Ernest Hemingway and now holds a Hemingway look-alike contest. Capt. Tony’s Saloon, another longstanding establishment, was the original location of Sloppy Joe’s in the early 1930s. The Hog’s Breath Saloon and Jimmy Buffet’s original Magaritaville are two more popular watering holes in the neighborhood.

Duval Street is also the center of several street festivals throughout the year. The most famous of these is Fantasy Fest in late October, during which the Conch King and Queen are crowned.