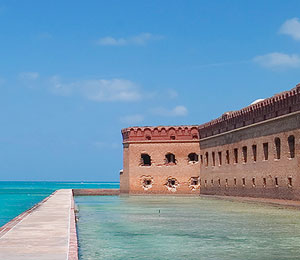 Vacationing in Key West provides visitors with many different activities and attractions for singles, couples and families. One of the big attractions a tourist may want to visit while traveling in this region is the various forts many of which are connected to Florida’s state parks. This article provides some information on the more popular fort you may wish to visit during your Florida vacation.

Fort Zachary Taylor State Park was designed as a historic landmark in 1973 and is located in the southernmost region of Florida. Not only is it an excellent choice for recreation, but it is also well-known for its history relative to the U.S. military. When it was first built in the mid-1800s it stood as one out of a series of three that were built in order to defend the southeastern U.S. coastline. It was finished in 1866 and has played significant roles in both the Civil War and Spanish-American War. Visitors to the park can enjoy guided tours of the fort every day.

Visitors can also enjoy some fun in the sun at Key West’s favorite beach which provides numerous opportunities for visitors to enjoy picnics, swim in the warm water or take in some snorkeling or fishing. Visitors can also enjoy the park’s nature trail and the opportunity for bicycling. The park is located at the end of Southard Street on Truman Annex.

Fort East Martello is a civil war fort and tower. The army began construction in 1862 for the purpose of providing protection of Key West as well as providing a defense against possible Confederate sea assaults.

Even though the area was still under Union control during the Civil War, most of the citizens supported the Confederacy. It’s rather strange that no battles took place considering the possible implications of such a rift. Since there was no use for the Fort as the war approached its close, the army left it in an unfinished state.

The Key West Art and Historical Society gathered an army of volunteers in 1950 and cleared away many years of accumulated debris and dust in order to open Fort East Martello as a museum. The Society restored the fort to its original 1860s design which now allows visitors to explore many preserved relics from the Civil War, obtain an education in the wrecking and cigar-manufacturing industries and view the abundant collection of folk art of Mario Sanchez and metal sculptures created by Stanley Papio. Visitors can also meet The Ghosts of East Martello including but not limited to Robert the Doll.

Fort Jefferson and the Dry Tortugas

The Dry Tortugas National Park is comprised of a total of seven small islands that include coral reefs, beautiful sandy beaches and warm waters. The area is famous for its bird and aquatic life as well as the myths of pirates and sunken treasure and of course, its exquisite beauty. A key feature of Fort Jefferson is the fact it is the most spacious of the 19th century coastal forts in America. The name “Las Tortugas” means “the turtles” in Spanish, and the reason Ponce De Leon gave the islands the name when he discovered them in 1513 was because the huge numbers of sea turtles kept his ships filled with fresh meat; unfortunately there was a lack of fresh water as the area was arid. Hunting substantially reduced the numbers of sea turtles, but there are still many varieties of these turtles even in the 21st century. Fort Jefferson is the highlight of the Dry Tortugas National Park where visitors can also sunbathe or snorkel in the beautiful warm waters that are typical of this island Paradise.

Fort West Martello is one of three forts in Key West that remain from the Civil War era. The Martello forts were built during the Napoleonic Wars and were considered almost impenetrable.

At the time of their construction the forts were designed to withstand any amount of force from attacks. The structures contained a round tower that was two to three stories high; there were cannons mounted on the flat roof of the tower and could be turned at a 180 degree angle at any given moment.

The construction of West Martello began in 1862 but was never finished possibly because some of the fortification was used as fill during the reconstruction of Fort Taylor from its original three story height to the one story that exists currently. Even though it was abandoned in 1866, there were three occasions when it was called upon to provide services again.

The remains of Fort West Martello now house the Key West Garden Club where there are a wide variety of community events, educational activities and sometimes even a wedding taking place.

Visitors to the Florida Keys have a variety of attractions to visit, not the least of which includes the Civil War forts that have been preserved and turned into state and national parks for the pleasure of tourists. In addition to learning the history of the forts, the parks offer a great deal of activities for the pleasure of families such as swimming, snorkeling, boating, picnicking and much more

Each of the forts has its own attractions and interesting historical beginnings, so you will find something different at each one. Get a look at Civil War history by visiting one of Florida’s historic forts and take home a piece of the past.