State and National Parks in Key West and the Florida Keys

State and National Parks in Key West and the Florida Keys 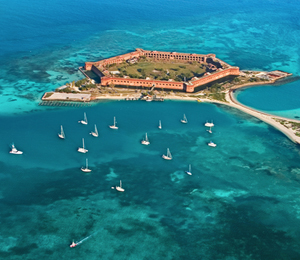 The Florida Keys have long been widely favored as a travel destination for both the short and long term due to the area’s special and distinguished attributes. These islands are also blessed with spectacular weather all year round and have a festive and relaxing atmosphere that keep people coming back.

Although there are many places for snorkeling and fishing, the Key West is also near many national and state parks that offer visitors a wide variety of natural beauty. There are several parks in Key West and the Florida Keys that people should check out before heading home.

Established in 1980, Biscayne National Park is a seascape in watercolors that offers visitors to Key West a unique underwater wilderness. When standing on the park’s narrow shore, they will be met by a bay that is teeming with life below and tranquil on the surface. Only 5 percent of Biscayne Park is land.

It also contains a mangrove shoreline that is considered the longest undeveloped shore located on Florida’s east coast. At the same time, there are 44 small barrier islands that are teeming with coral reefs. However, only a few of them are open to the park’s visitors. Tiny Key Adams has picnic areas while tiny Boca Chita Key is home to the country’s second largest lighthouse and has areas for both camping and picnicking.

At the same time, Long Elliot Key features camping and hiking among mangrove forests. Because it is mostly underwater, the best way for a tourist to truly experience the park’s diverse natural flora is through scuba diving or snorkeling. Beneath the surface, there is an underwater world that explodes with multicolor life with everything from vibrant parrotfish and angelfish to multi-shaded labyrinths of coral and swaying sea fans.

The water from Big Cypress Swamp is very important to the health of the neighboring Everglades. It also supports the rich marine estuaries found along the state’s southwest coast. Protecting a total of 720,000 acres of this huge swamp, Big Cypress National Reserve has plenty of temperate and tropical plant communities that are home to a wide range of wildlife including the unique and elusive Florida panther.

At Big Cypress National Reserve, people will find a recreational paradise full of bird watching, hunting, OHV trails, hiking, kayaking, canoeing and camping opportunities. A person who passes through this national reserve may be enticed to discover the remnants of wild Florida. They can watch an endangered woodstork eating along a roadside canal or search for a trace of the elusive Florida panther.

Located about 70 nautical miles west of Key West, Florida, the Dry Tortugas National Park is a seven-mile long archipelago that consist of seven low-lying islands. Along with a marine life and bird sanctuary, it is home to some of the healthiest coral reefs found off the North American shoreline. Although it has an official bird list of about 299 species, only eight of them generally nest in the park.

At the same time, it features the only nesting colonies of the masked booby, magnificent frigatebird and brown noddy in the contiguous United States. Bird watching peaks every spring when many migratory birds species pass through the park on their way south daily. Towering in the midst of this subtropical paradise is Fort Jefferson, a relic of Civil War-era military strategy.

The national park is also home to three easterly keys that are little more than tiny spits of white coral sand. Near Fort Jefferson is Bush Key. Bush Key is home to a wide range of prickly pear cacti, sea oats, mangroves, sea grace and bay cedar that reflect the unique desert island character of the islands. The national park’s chain ends about three mile west at Loggerhead Key. Loggerhead Key is the home to a lighthouse that was completed in 1858 and still flashes a beacon to boats nearby.

The Great White Heron Wildlife National Refuge is conveniently located in lower Key West and the Florida Keys. It was established in 1938 as a haven for migratory birds and great white herons. The park consists of almost 200,000 acres of islands and open waters that are located north of the primary keys from Key West to Marathon.

It has small backcountry islands that are predominantly covered by mangrove while the few larger islands are filled with hammocks and tropical hardwood. Aside from being the haven of the great white heron and other bird species, the area is also an important habitat for a number of endangered sea turtles. Both the loggerhead sea turtle and green sea turtle nest on the few sandy beaches.

Aside from that, the Hawksbill Sea Turtle eats the grasses that are found in the shallow waters off the park. The park’s surrounding waters also protect the islands and serve as a cushion for the entire region.

Spanning most of Florida Bay and the southern tip of the peninsula, The Everglades National Park is the only subtropical preserve located in North America. It contains both tropical and temperate plant communities that include hardwood hammocks, pinelands, saw grass prairies, cypress and mangrove swamps.

The park is also known for its rich bird life including large wading birds such as the wood stork great blue heron and roseate spoonbill in addition to a variety of egrets due to its freshwater sloughs. Freshwater sloughs are considered the most common ecosystem that is found in the Everglade National Park. At the same time, it is the only location in the world where crocodiles and alligators exist side by side.

Hammocks are the only dry land found within the park. The Everglades National Park features thousands of hammocks amid its numerous sloughs. Due to its unique natural habitat, UNESCO awarded the park World Heritage Site and international biosphere reserve status.

Because Florida Bay is the largest body of water found within the park, it is home to numerous sponges, sea grasses and coral that often serve as food and shelter mollusks and crustaceans. These species in turn serves as food for larger marine animals such as stingrays, barracudas and sharks that live in this ecosystem.